“These lakes support world-class fisheries. At Cochrane Air Services, we are serious about maintaining their quality.”

A trophy fish is simply too valuable a fish to be caught just once, killed for taxidermy or, heaven forbid, eaten. Cochrane Air Services has countless great-eating, 14 to 16 inch walleyes for anglers who enjoy a fresh fish-fry. Putting a trophy fish back strengthens both the trophy population and the gene pool. Big fish – those with the proven ability to survive and grow large – propagate more trophy fish and more exciting angling experiences.

Because of the sub-Arctic climate and a very short growing year, the trophy fish in our many lakes take an extraordinary amount of time to get as big as they are. A trophy pike may be 30 to 40 years of age, a typical 14 – 16 inch walleye ten years!

For our conservation efforts to be truly successful, we depend on guests to demonstrate consideration and concern for the fishery, including the careful handling of all fish, selective harvest, and conscientious catch & release practices.

Each season, Cochrane Air Service anglers catch and release a number of monster northern pike. In the last few years a handful of fantastic 50″+ fish have been caught which could have set new Canadian release records had the measurements and suitable photos been submitted. The fish were photographed and witnessed but anglers, not wanting to stress and harm these fragile fish, respectfully choose to quickly release them and not put them through the rigors of girth and length measurements which can often lead to the death of the fish.

Dozens of trophy pike (36″ and larger) are released each season. As a result, the average size of fish caught, has continuously increased each season since our conservation policies have been in effect. The result? A healthier fish population and even better fishing !

As a result of a Ministry of Natural Resources study (1995), the management of Cochrane Air Services and the Ontario MNR are making changes to their fishing policies. All walleyes over 16″ must be released and no fish are to be taken home. However, fish-fry dinners are considered to be an traditional part of the Cochrane Air experience and remain integral to any remote fishing experience. The maximum allowable size for walleye kept for consumption is 16 inches (1.5 pounds).

Thank you very much for your cooperation.

It’s through working with mindful anglers such as yourself that helps make the Cochrane Air experience world class! 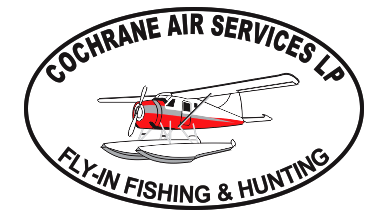